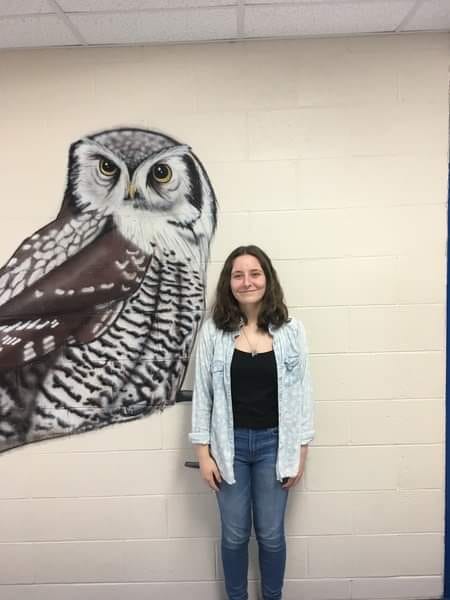 Our student OAUW Board member.

This is shared from Oscoda FIRST Sophia Rayes:
The Unordinary Life Sophia Rayes is currently a Senior at Oscoda High School. She has spent 3 years on the Robotics Team 7250. Sophia joined the team because she heard so many great things from her older brother, Grayson Rayes. He was on the team when it started and the things she heard about robotics from her brother inspired her to try something exciting and new. On the robotics team, Sophia has served on the business, media, and now serves as the electrical lead. Her role consists of diagramming wire pathing, placement of electrical parts, troubleshooting, and mentoring other students about electrical aspects of robotics. One of Sophia’s favorite memories of robotics is participating in her first competition after seeing the bleachers filled with students from all different schools, chanting, flying their school colors, and dancing to the music playing over the intercom. It was the first time she had seen so much enthusiasm, pride, and comradery in one room. It was awe-inspiring and what ultimately convinced her that robotics is where she wanted to be. Sophia is fortunate enough to be involved in a variety of sports, clubs, service organizations, and academic opportunities that drive her to better herself and those around her. Notably, she is the student representative on the Board of Education, in addition to the Oscoda United Way board; she has done track, cross country, wrestled, and played volleyball. She is also in the student council, NHS, Interact club, and holds a job rendering landscaping services during the summer months. In her spare time, Sophia loves to read and write, along with playing video games and listening to music. She is also interested in doing anything that is fun and creative! After finishing high school, Sophia plans on attending the University of Michigan to become a secondary English teacher. She has always loved inspiring and helping others, so she is excited to pursue a career that combines both of those qualities.